Over recent months there has been a crash in prices for commodities – metals, fossil fuels and some cash crops – primarily caused by the fall in demand for raw materials from China. Many impoverished countries continue to be reliant on commodities for their income, so have been hit hard by this fall in prices.

One way this is seen is falling exchange rates. Ghana, Zambia and Mozambique are three countries particularly affected, with their exchange rates falling by 40%, 55% and 30% respectively against the dollar since the start of 2014.

Jubilee Debt Campaign has previously warned that these countries are at risk of new debt crises, given the scale of lending taking place to them, and the lack of diversification away from their dependence on commodities and their wild price swings. The immediate direct impact of the fall in the value of their currencies is that it increases the real size of their debts. 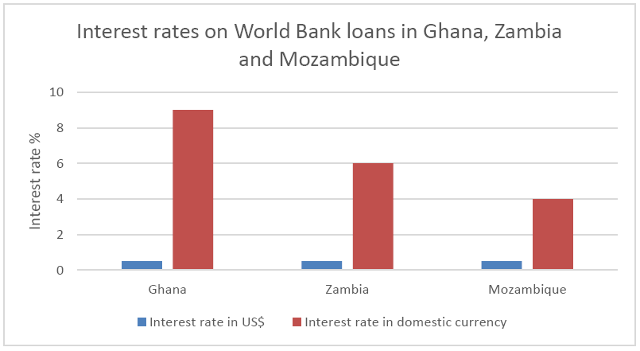 Debts owed outside the country are valued in dollars or other foreign currencies. A fall in the exchange rate immediately increases the relative size of debt payments in domestic currency. Such exchange rate changes are a big risk of borrowing in foreign currencies, and are usually the trigger for the start of debt crises where there is a sudden increase in debt payments at the cost of funding public services.

All three of these countries have borrowed from foreign private financial markets, but large amounts of lending has also been made to them by multilateral institutions such as the World Bank and other governments. World Bank loans are often claimed to be risk free because they come with a low interest rate, currently 0.5% for the most impoverished countries.

However, these loans are also given in dollars, and so the relative size of them has increased with the exchange rate falls. For instance, between 2004 and 2013, Ghana was lent $2.8 billion by the World Bank, which totalled 3.8 billion Ghanaian Cedi’s. However, the fall in the Ghanaian Cedi now means that, based on current exchange rates, Ghana will pay back 12.8 billion Cedi’s, three times more what was lent. The effective interest rate Ghana is now paying on these World Bank loans is 9%.

We calculate that Zambia is now facing an effective exchange rate of 6% to the World Bank, and Mozambique 4%. If exchange rates fall further in the future, the more the real cost to countries of such foreign loans will increase.

All three of these countries have also borrowed in recent years in dollars from foreign private financial markets, through bonds usually issued under English law. For instance, Ghana borrowed $750 million through a 10-year bond in 2013 at 8% interest rate, Zambia, $1 billion in 2014 at 8.625% and Mozambique $500 million in 2013 at 8.5% interest rate. Again the real cost of payments on these loans has increased rapidly with the fall in exchange rates. We calculate that the effective interest rate for Ghana, Zambia and Mozambique on these bonds are now 27%, 26% and 19% respectively.

Ghana, which is spending over 30% of government revenue on debt payments in 2015, is now being lent more money by the IMF to enable these debts to be paid. Mozambique is due to agree a similar loan agreement with the IMF, whilst Zambia has rejected a deal for the moment. Just as in Greece, these IMF loans are paying off previous lenders. Unless some of the debts are cancelled or stop being paid, all the costs of the commodity price and exchange rate falls will be born by the people of Ghana, Zambia and Mozambique, and non by the lenders, whether the World Bank, private speculators or others.