Home ⟩ News ⟩ Poverty trap: household debt is on the rise in the UK 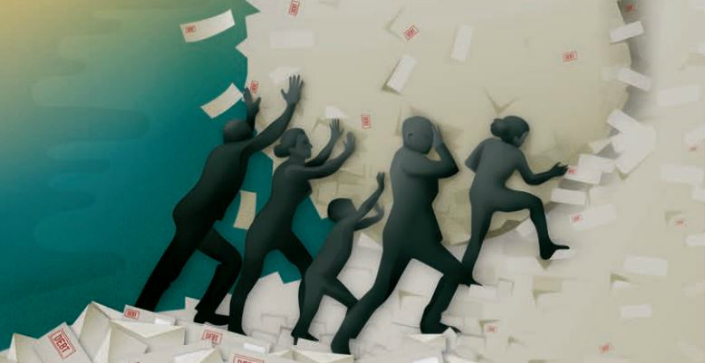 No-one should have to get into debt just to put food on the table and heat their homes. That’s why we’re launching a new campaign on household debt.

It is now a decade since the onset of the global financial crisis and the ‘Great Recession’. The growth in household debt in the run up to 2008 has been identified by the Bank of England as a key factor in the cause of the crisis, and the Bank has also said that the legacy of high household indebtedness has held back economic recovery. Yet very little has been done to tackle the household debt burden over the last 10 years. In fact, a series of government policies and policy failures have contributed to a new rise in household indebtedness.

This rising household debt burden is not distributed equally across society. Rising household debts are hitting the poorest families the hardest, and leading to a debt-poverty trap. People are having to take on debt just to cover basic needs and then facing spiraling debt servicing costs which further eat into their available income and push them into further debt.

According to recent analysis by the Centre for Responsible Credit, 3 million households (containing just under 7 million people) are now severely indebted – paying more than a quarter of their income to their lenders. Almost half (45%) of the severely-indebted population are concentrated in the very poorest households. On average, these very poorest indebted households are paying out 35% of their incomes on debt repayments. This is over three times the level paid out by borrowers with the highest incomes.

How did we get here?

The central issue underlying the household debt crisis is that growing numbers of people simply do not have enough money to survive, making them vulnerable to exploitation by rip-off predatory lenders. Key factors behind the crisis include:

Time for a household debt jubilee

Our background as the Jubilee Debt Campaign is in campaigning where the impacts of debt and poverty have been historically the most profound: on the public debts of countries in the global south. With a new global south debt crisis on the horizon, this continues to be a top priority for us and will be as long as public debt crises are causing poverty and inequality in impoverished countries.

But the 2008 financial crisis and the government policy response has brought the issue of unjust debt much closer to home. The household debt crisis is driving poverty, misery, mental health problems, and homelessness. It’s having particularly negative impacts on women, and completely unacceptable impacts on child wellbeing. And with the economic insecurity posed by Brexit and further planned cuts to public spending, the problem is set to get worse.

We believe it’s time to act, and that’s why we’re joining forces with a new group of partners, including the Centre for Responsible Credit and the New Economics Foundation to call for government action on unjust household debt. To kick things off, in March we launched a joint briefing with the Centre for Responsible Credit exploring the possibility of a Household Debt Jubilee at an event in Parliament, attended by MPs, Peers and actor Michael Sheen. And that was just the beginning, there is much more to be done.

We need your help: become a local advocate for this critical campaign

We’re pushing for a write-off to tackle the burden of unjust debt on the poorest households, and for a cap on the cost of credit to tackle rip-off lending. By working together we can win big changes by getting active in our communities, building awareness and pressure from the grassroots. We want to build this campaign with you, which is why we’re asking you to step forward now; sign-up to get involved and let us know the ways in which you’re willing to take action.