This week the Jubilee Debt Campaign joined 146 organisations from around the world to demand that western governments, the World Bank and other development banks stop prioritising public-private partnerships (PPPs) over traditional public borrowing to finance social and economic infrastructure and services.

Maria Jose Romero of the European Network on Debt and Development, said:

“Until relatively recently PPPs were largely confined to developed economies, but now they are being aggressively pushed onto countries in the global south as the answer to development finance shortfalls.”

This dangerous trend means the very countries which are already most vulnerable to debt and most in need of development aid are saddled with expensive, high risk, undemocratic and unaccountable projects. It’s the reason why a new hospital in Lesotho, for instance, has cost three times more than the one it replaced and has swallowed up a quarter of the country’s health budget.

Similar schemes in the UK have been widely discredited by government ministers. Liam Fox, international trade secretary, Jeremy Hunt, health secretary, and Boris Johnson, foreign secretary, have all criticised the costs of public-private partnership projects in the UK — with Boris Johnson comparing them to ‘looting’.

One hospital PPP in the UK received an initial private sector investment of £1.149 billion, which has left the public sector having to pay six times more – £7.194 billion – between 2007 and 2048.

But government departments, often with the help of UK aid funds, continue to promote the funding model to impoverished countries overseas. Presumably this is carried out to create opportunities for UK companies with PPP experience to win contracts.

Send an email to Jeremy Hunt: demand the UK government must stop promoting rip-off finance for healthcare in the Global South. 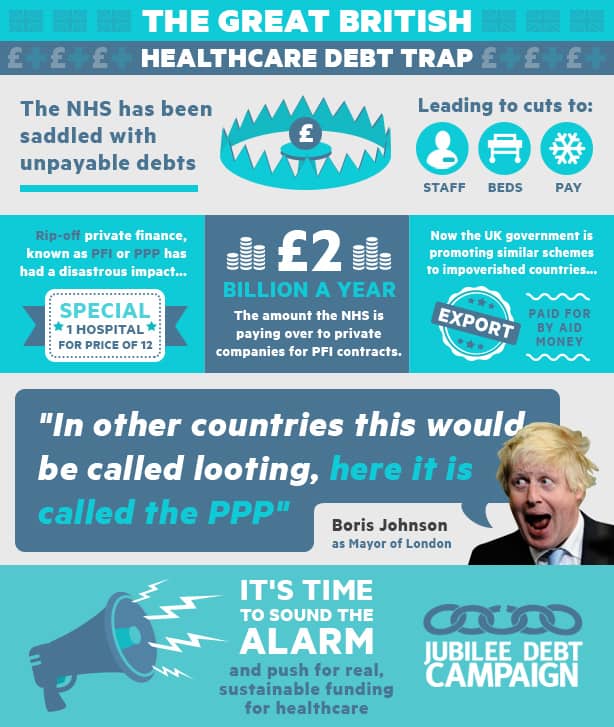