Since April, the G20 group of self-appointed most powerful countries in the world have been offering to suspend debt payments for up to 73 poor countries facing debt problems because of Covid-19. However, the suspension only covers debt payments to other governments, not to private lenders and multilateral institutions. All debt suspended will come due to be paid in the future, creating  an even bigger debt problem for those countries a few years down the line.

Because private lenders are not included, part of the impact of the G20 scheme has been to effectively bail out rich speculators. Countries which would otherwise have struggled to repay debts save money on debt payments to other governments, but those savings are then used to pay private lenders instead.

With this in mind, the G20 have committed to agree a ‘Common Framework’ for tackling the Covid-19 debt crisis. In advance of its announcement, G20 governments had said this would address two of the key problems with suspension. First, it would enable cancellation, not just suspension of debts, and second, it would include debts to private lenders, not just to other governments.

On 13 November, G20 Finance Ministers announced the first details of the Common Framework. So far, it falls short on even the G20’s own ambitions.

This is not debt cancellation
Any debtor which enters the G20’s new scheme will be able to negotiate a restructuring of its debt to G20 and other western governments. The G20 say they will consider changes to the debt which reduce debt payments – this is likely to include cuts in interest rates and lengthening of time for debts to be repaid.

However, the G20 statement is very unclear and contradictory on debt write off, saying they will allow for write-off “where necessary”, but that “In principle, debt treatments will not be conducted in the form of debt write-off or cancellation”. Changing payment terms rather than cancelling debt is similar to the current suspension scheme. It mainly kicks the can down the road, creating a future debt problem. And it doesn’t deliver the big reduction in debt needed for governments to be able to rebuild their economies following the Covid crisis.

Meaningless words on multilateral debt
The G20 calls on multilateral lenders, such as the World Bank, to contribute to the scheme through three mechanisms – 1) make debtor governments cut public spending and increase taxes, 2) more lending and 3) debt relief. The first is simply a call on the World Bank and IMF not to contribute but do what they have done for decades, enforce austerity on debtor governments. The second builds up even more debt and so means even less chance of recovery in the future, while many debtors are already unable to take on more debt.

Finally, the call for debt relief is not what it seems. In a footnote the G20 statement says “Different options were used in the past to deal with debt vulnerabilities … There is currently no consensus on how these previous options might apply to current circumstances.”

China’s concern about the lack of participation of the multilateral banks is a reasonable one.  64% of the 2021 debt payments included in the current scheme are to China, whereas China accounts for 25% of external debt payments in 2021 in total. China has been resistant to including all of its lenders the Debt Service Suspension Initiative, and to debt cancellation in the Common Framework. But getting greater buy-in from China requires Western governments accepting that private and multilateral lenders need to be fully included. 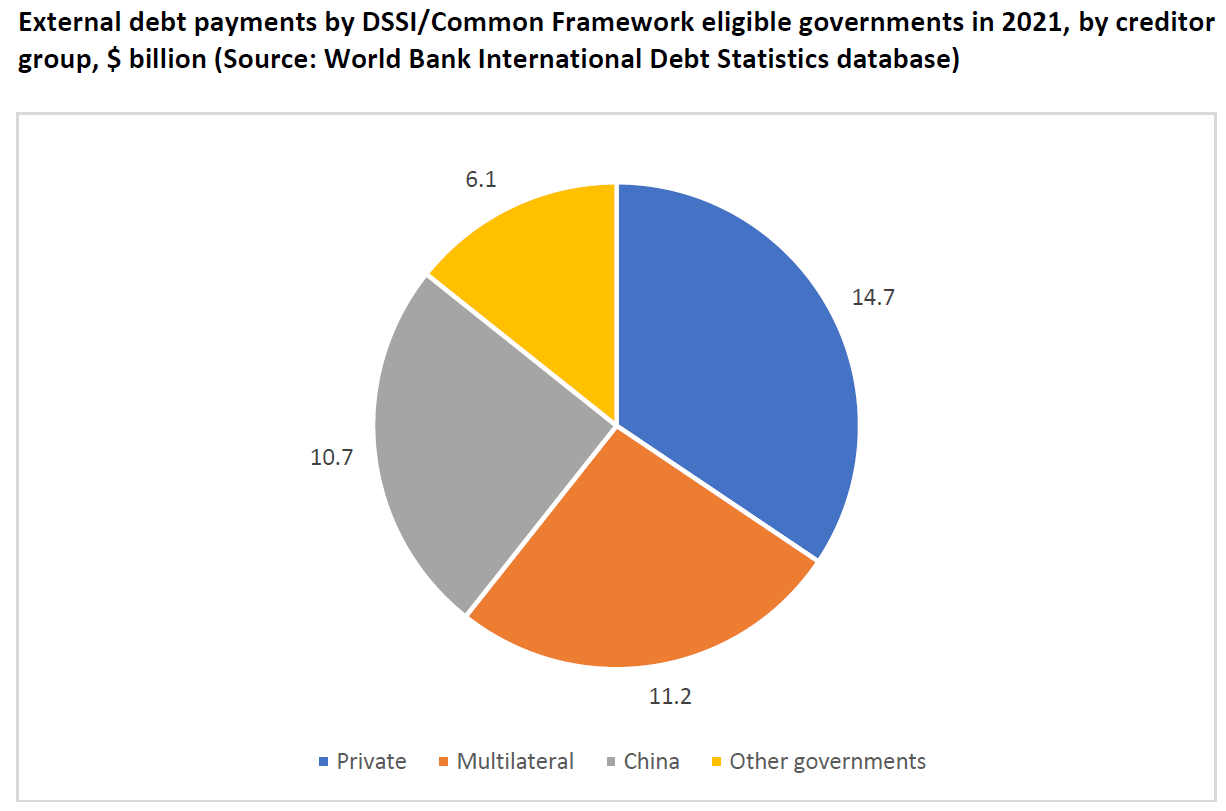 Applying for debt relief and debt assessments
All 73 countries included in the G20’s debt suspension initiative are in theory eligible for the Common Framework for debt treatments. The G20 says the process will begin when a debtor country requests it.

Then the G20 say the amount of debt restructuring required will be determined by IMF and World Bank Debt Sustainability Assessments AND the assessments of the governments who are owed debt. The confusion of using two or more different debt assessments is again a negotiating compromise, where China did not want to have to abide by what the IMF and World Bank assessments say.

The problem across all these assessments is the conflict of interest. The IMF and World Bank, the governments which run them, and lending governments, are all large creditors themselves. Instead, an independent assessment is needed of the amount of debt which needs to be cancelled.

More confusingly, despite their name, IMF and World Bank Debt Sustainability Assessments do not assess how much debt is sustainable. They try to predict whether or not a government will default on its debt, giving risk ratings of low, moderate, high risk or in debt distress. The G20 have given no detail of what risk rating will be needed for a government to receive G20 debt relief, and what risk rating a government’s debt will need to be reduced to following debt relief. Furthermore, the IMF and World Bank do not conduct full Debt Sustainability Assessments for some of the 73 countries, such as Angola and Pakistan.

All of this leaves debtor governments and citizens in debtor and creditor countries in the dark as to what debt relief is on offer – and whether it is worth governments applying for the scheme.

How the G20 scheme needs to change
On its initial details, the G20 Common Framework offers very little, while continuing to let private lenders off the hook. Key changes which need to be made include:

It would remain the sovereign right of a debtor to decide whether to apply for the debt cancellation scheme. But making it a scheme which can comprehensively cancel external debts down to a sustainable level would make it one debtors would actually want to use, and so would provide a key tool in the recovery from the Covid crisis.