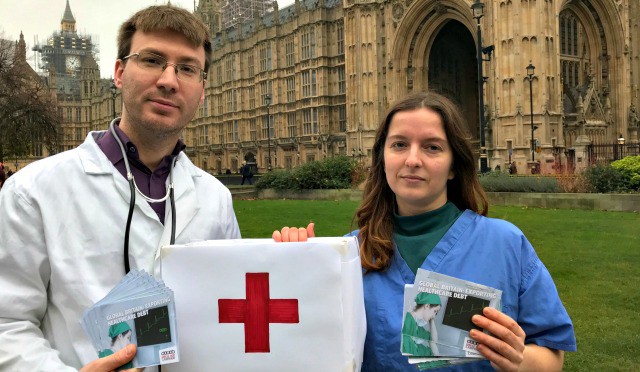 This week we delivered hundreds of campaign postcards to the Department of Health. The government department has been promoting a private finance scheme to impoverished nations, despite the fact that a similar scheme has burdened the NHS with debt and threatens the provision of good quality, affordable healthcare in the UK.

The use of the ‘Private Finance Initiative’ to fund UK hospitals has been widely discredited, including by the National Audit Office, the Treasury Select Committee, and various government Ministers. “In other countries this would be called looting, here it is called the PPP”, said Boris Johnson while serving as Mayor of London.

The recent collapse of Carillion has again showed how disastrous public-private partnerships are in the UK. Our latest article for New Internationalist makes the links between Carillion, the NHS winter crisis and the scandal of private finance schemes being promoted by the UK government overseas.

The NHS is paying over £2 billion every year to private companies for PFI contracts. And yet the Department of Health, through Healthcare UK, has been promoting the use of similar Public Private Partnerships (PPPs) around the world. PPPs put the healthcare systems of impoverished countries like Zambia and Liberia at risk of unjust and unpayable debts.

Thank you to everyone who has written to the Secretary of State for Health to insist that Healthcare UK and the wider UK government stop promoting this flawed model to countries in the global south. If you haven’t already, you can sign the petition here.