From credit cards to loans - more and more people are being forced into a debt trap. Make sure debt justice is high on the agenda this election
Home ⟩ Campaigns ⟩ Debt Week 2019

Take part in the week of action

Debt Week is a nationwide week of action to end the debt trap faced by people, families and communities across the UK. From 23 November – 1 December we’ll be making sure our voices are heard. This year’s Debt Week is in the run up to a general election, it’s more important than ever that we campaign for change.

What do we want the Government to do?

Personal debt has reached the highest levels ever – a staggering £217 billion. One in four people in the UK are now affected.

There’s a whole industry that preys on some of the UK’s poorest families, charging sky-high interest rates that pull people into a debt trap.

We’re pushing the government to end rip-off lending by capping interest and charges for loans, credit cards, overdrafts and doorstep lending. We’re calling for an urgent inquiry into why so little action has been taken so far. 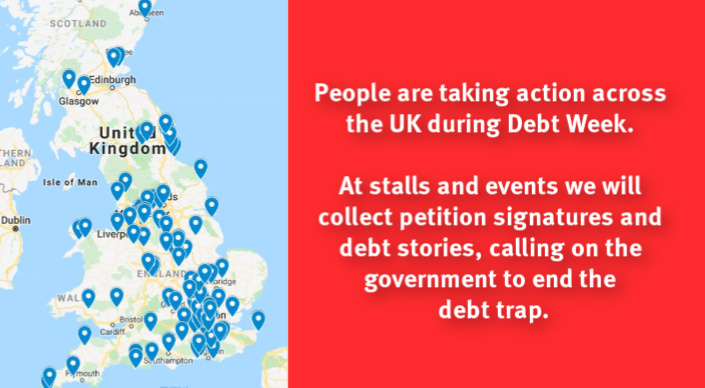 How can I get involved?

1. Take action: find out how many people are struggling with debt in your area and email your local candidates. Spread the word on Twitter, Facebook and other platforms #debtweek #EndTheDebtTrap.
2. Book your place at Debt Week events in Birmingham and Bristol. Or, if you can run your own stall or event order campaign materials and we will be delighted to send you leaflets, stickers and posters.
3. Tell us how debt has affected your life. The Government has to see the true impact of the debt crisis. Let us know how debt has affected you and we’ll send your story (anonymously) together with thousands of others so they can see the true extent of the debt crisis. Millions of us are facing debt, but together we can change the rules and end the debt trap.

4. Write to your local newspaper or your Parliamentary candidates.

5. Ask a question at hustings. During an election candidates in your area will attend local hustings events where their constituents can ask them questions. This is a great opportunity to ask them a question face to face about what they will do to tend the debt trap if elected. You could ask, for example, ‘Personal debt has skyrocketed in recent years, reaching its highest ever level – at £217 billion. What will you do if elected to stop rip-off lending and extortionate interest rates?’

Thank you for getting involved! If you have any questions or ideas about what else you can do please email abinaya [at] jubileedebt.org.uk