Home ⟩ Countries in crisis ⟩ The Greek debt crisis: A case of banks before people

The Greek government was lent large amounts from foreign banks in the 1990s and 2000s in order to buy exports from countries such as Germany. This fueled an economic boom, though did nothing to reduce unemployment. The global financial crisis increased the loans as the Greek government had to cope with a fall in revenues and rise in spending, whilst foreign banks looked to lend to governments as a supposed safe haven.

By 2010, Greece could not afford to pay its debts, but rather than defaulting – which would have caused further problems for foreign banks – the EU and IMF gave bailout loans. These have effectively paid off the reckless lenders, whilst leaving Greece even more indebted. Austerity and huge debt payments have crashed the economy, with unemployment and poverty exploding. In 2015 the Greek government sought to renegotiate its debts, in the same way that Germany received large amounts of debt cancellation in 1953. This was rebuffed, and after being threatened with being kicked-out of the eurozone, the government gave in and agreed to even more austerity.

There is widespread acknowledgement that Greece needs large scale debt cancellation, but neither the IMF or EU have been willing to cancel any of the debts owed to them. Between the start of the global financial crisis in 2007, and 2017, the proportion of Greeks living in severe deprivation has doubled, the economy has crashed by one-quarter, and the government’s foreign-owed debt has more than doubled from 70% of GDP to 150%.

As with many countries in Africa and Latin America, the Greek government’s large debt was initially created during the oil price spikes of the 1970s. In the 1980s the economy stagnated with an unemployment rate of over 7%.

From the mid-1990s the economy began to boom as large amounts were lent from European banks for Greece to buy imports from countries in the core of the EU such as Germany. This process intensified with the adoption of the Euro in 2001. However, despite the high economic growth, unemployment remained high. Unlike other crises in European countries, in Greece the main borrower was the government. Government foreign-owed debt was already a very high 60% of GDP in 2003, the year figures were first recorded. It continued growing to 90% of GDP by 2007.

Banks in countries such as Germany and the UK were lending the Greek government the money, which was ultimately used to buy exports from other countries. One key area of expenditure was the military. Between 2000 and 2007, Greece’s government military spending was 3% of GDP (almost 8% of government revenue), the highest amount for any European country, though not as high as the US. Large borrowing was also undertaken to fund the Athens Olympic games in 2004, with costs continually increasing on initially stated estimates.

Between 1990 and 2011 the three largest suppliers of arms to the Greek government were companies from the United States ($17 billion), Germany ($8 billion) and France ($3 billion). The Greek government hid the true amount of its debt in various ways. In one infamous case, in 2002 the US bank Goldman Sachs created specific derivatives to keep debt off the books and hidden from the Greek people and EU rules.

When the global financial crisis began in 2008, lending to Greece increased to help the country cope with the impact of lower tax revenues and the need for higher government spending. Foreign banks were particularly keen to lend to governments such as Greece, because governments were now seen as safe compared to their fellow banks. By the start of 2010, French banks had lent the Greek government and banks $53.5 billion, German banks $36.8 billion and British banks $12 billion.

In the Spring of 2010, lenders began to finally lose confidence in the ability of the Greek government to pay its debts. The government admitted that it could no longer afford to make debt payments, but rather than defaulting, it took bailout loans from the IMF and EU. These new loans were used to pay-off the reckless banks, whilst keeping and increasing the Greek debt. By early 2013, the EU and IMF had lent $290 billion amounting to 65% of the Greek government’s foreign-owed debt. In return they insisted on a widespread austerity programme, which contributed to the economy crashing even further. 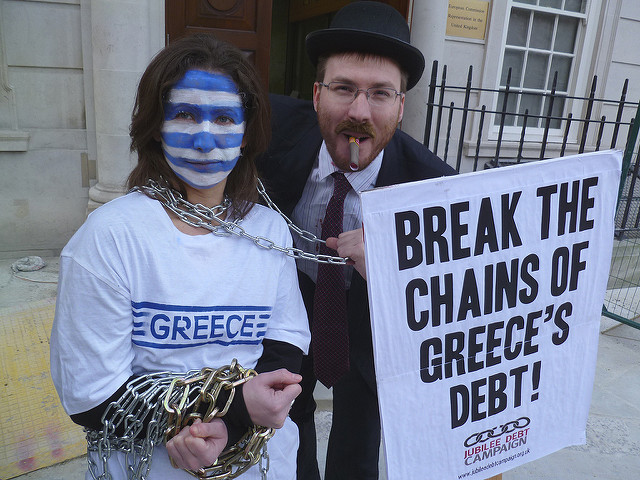 In 2011 the IMF, EU and lenders accepted that the debt was too big, and negotiations began between the Greek government and private lenders to reduce the amount of debt they were owed. A deal was finally reached in March 2012, which reduced the amount of debt owed to private creditors.

However, this did not cover any of the debt owed to the IMF and EU, including bonds bought by the European Central Bank, which otherwise would have been covered. It treated Greek and foreign creditors the same, making big cuts to Greek pension funds and banks, necessitating more bailouts and thereby more debt for the Greek government. Debts owed under UK law were not covered, after the UK government refused to enforce the debt restructuring. And the deal still meant that lenders got back more money than if they had sold their debt on the market. Overall, Greek government foreign-owed debt actually shot-up in 2012 as the government took on more bailout loans to in turn bail out Greek banks allowing them a guaranteed pot of money with which to keep paying the remaining private debt, and because the economy kept crashing.

In 2015, the Syriza government came to power, saying that the EU and IMF should agree to a debt conference to get debts down to a sustainable level, as happened for Germany in 1953. A debt audit by the Greek parliament backed-up Jubilee Debt Campaign’s calculation that over 90% of the bailout loans “to Greece” had actually paid off reckless lenders. However, the EU and IMF refused to negotiate on the debt, and the EU threatened Greece with being kicked-out of the Eurozone if it did not introduce even more austerity. Despite a referendum opposing more austerity, the Greek government caved in.

In Greece in 2017, 22% of the population were classed as living in ‘extreme material deprivation’ – otherwise known as extreme poverty. This includes not being able to afford a decent diet, sufficient heating or electricity or to meet emergency expenses. Around 22% of the population are unemployed, still well over the 12% when the austerity programme began in 2010. The economy remains 25% smaller than at the start of the crisis, and the government’s foreign owed debt has more than doubled from 70% of GDP in 2007 to 150% today.

Greek livelihoods and lives continue to be destroyed in the name of paying off debts to reckless lenders.