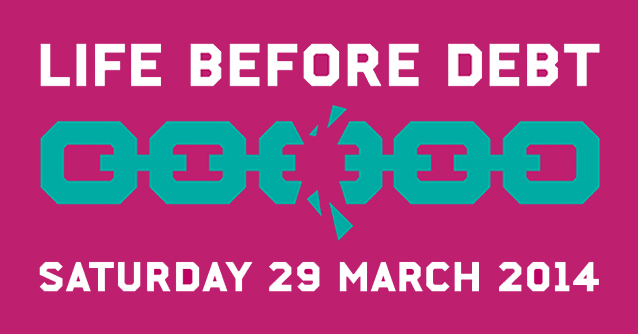 Debt and morality: When is it okay not to pay?

This mainstream morality that ‘debts must always be paid’ obscures the irresponsible and exploitative profiteering by lenders and the deep structural economic injustices that force people and countries into the debt-poverty cycle in the first place.

We ask whether challenging debt slavery first requires us to throw off the mental chains of the current morality around debt. Do we need a new set of ethics around debt for the twenty-first century, grounded in a critical analysis of the structures and power relations that are the real drivers of the debt crisis and debt slavery?

Plus: Alinah Azadeh, Burning the Books

Ordinary people and communities across Europe have been ravaged by the impacts of austerity measures imposed to pay for the debts built up from the bank bail-outs during the 2008 financial crisis. People have paid the price for the greed and profiteering of the banks with our jobs, wages, homes, and access to basic services.  Millions are now struggling to meet their basic needs. This session looks at which countries in Europe have been hardest hit and why; whether the government debt built up to bail out the banks should be considered odious and illegitimate; how European activists and movements are challenging this injustice; and what lessons we can learn from Latin America’s crisis in the 1980s.

Payday Loans: An industry without mercy

The rise of payday lenders offering short-term loans at astronomical rates of interest has become a symbol of the deepening inequality since the crash. How has this industry expanded and how does it make its profit? What options are out there for fair access to finance? And does widening access to fair finance fully solve the problem, or do we also need to tackle the structural causes of the UK’s personal debt crisis?

Dictator Debt and the Arab Uprisings

The popular uprisings in North Africa were grounded in the economic exploitation of people suffering from high rates of unemployment and price increases. Dictatorships in both Tunisia and Egypt were lent large amounts as part of programmes to push through free market reforms in the 1990s and 2000s. Today, these debts continue to be paid, with international institutions lending more money in return for further economic reforms. This session will hear from campaigners from Egypt and Tunisia about their push for audits into, and non-payment of, the debts inherited from dictators.

Introduction to ‘private finance’ and its growing power over our lives

Wealthy investors and profit-hungry financial institutions like banks and hedge funds are getting more and more control of our hospitals, schools, roads, food, forests and water. Things which used to be ‘public’, i.e. owned by and for the benefit of all of us, are being handed over to private finance investors as a source of new profits. This introductory session looks at why this is happening, who is benefiting, and what are the impacts for ordinary people and our communities and societies.

The austerity machine: An interactive history

This introductory session will use interactive ways to explore the history of how debt has been used to enforce austerity and free market economic reforms on people across the world. From colonialism to the present day financial crisis, the workshop identifies key moments in the struggle for economic justice.

Where did the money go? Debt audits as a tool for resistance

Citizen debt audit campaigns assessing the legitimacy or illegitimacy of debts have been set up in several countries in Europe and North Africa since the crisis started, taking inspiration from debt audits in the global South. Activists from the International Citizens Debt Audit Network discuss the choices for debt audit campaigns and their role in the struggle against the rule of debt.

The UK is facing unprecedented levels of personal debt. Nearly nine million people are now living with serious debt problems. In five English cities, more than 40% of the population is struggling to repay debt. This session will look at the human face of this personal debt crisis – its impacts on young people, families, older people and communities – and ask why so many people are now reliant on credit for their basic needs and what happens if you can no longer pay up.
Speakers: Katie Curtis The Children’s Society; Ruth London Fuel Poverty Action

The Student Debt Trap: Loans, Fees and Privatisation of Higher Education in the UK

Tripled fees, the looming sell-off of the loan book, and a crackdown on dissent – British universities are rapidly heading down the path of the United States, where since the 1970s students have been locked in to a lifetime of debt, while education has become a financial investment not a public good. What are the government’s plans for Higher Education in the UK, what would it take to transform the debate, and what can we learn from student debt struggles around the world?

The Third World Debt crisis and the new debt bubble

The Third World debt crisis of the 1980s and 1990s impoverished millions of people, as wealth was looted out of countries and austerity was enforced by lenders. This session will examine the situation today, with many countries still paying huge debts, a lending boom to others who had debts cancelled, and a rise in debts arising from land grabs, ‘aid’ for western businesses and climate change loans.

Financialisation in Mexico and Brazil: How new financial imperatives are transforming the South

More and more of our public services like hospitals and schools are being handed over to wealthy private investors as a source of profit. This drive for private financing has brought several NHS trusts to the verge of bankruptcy, driven the closure of vital health services, and saddled taxpayers with a mountain of debt at sky high interest repayments. This session looks at how this situation has come about, who benefits, who is harmed, and what we can do about it.

There is a long history of state repression and police violence in response to public resistance to austerity programmes implemented to service unjust and illegitimate debts. The most recent manifestation of this is the violent and aggressive repression of anti-austerity protesters combined with the curtailment of civil and political rights across the Eurozone, most notably in Greece and Spain. This session looks at some of these recent cases and seeks to understand them in the context of the state’s role combining a monopoly over the means of violence and an enabler of exploitative, unjust neoliberal economics.

Gambling with the Commons: The financial takeover of our food and land

If we want control over our economy and society, we need to have control over critical resources like food and land. But in recent years both food and land have become increasingly ‘financialised’, so that the distribution of these precious resources is decided by financial markets, not by human need. Through complex processes involving food speculation, land- grabbing and environmental offsetting, we are losing control of the ‘commons’, and losing the argument that some things are too important to be decided by the market. Come and learn more about the process of finacialisation of basic resources and find our how we can challenge this process.

Vulture funds: What they are and how to stop them

Vulture funds seek enormous profits through buying up debts cheaply from countries and companies in crisis, then suing for a much greater amount. Jubilee Debt Campaign got legislation passed in the UK to prevent court cases against the most impoverished countries, but vulture funds continue to attack countries like Argentina and Greece, as well as the Co-operative Bank. This session will explain how vulture funds go about their work, and the ways in which they could be stopped.

This workshop will be an introduction to how creativity and the arts can be used as effective organising and campaigning tools, including as forms of debt resistance. It will provide some examples of previous creative campaigning, and allow you to generate suitable approaches for any cause, including a conversation on how to plan a future creative intervention.

Life Before Debt: How do we get there?

Across the world thousands of activists are campaigning to throw off the chains of illegitimate debt. The rich diversity of campaigns and tactics being used reflect the diversity of political contexts and challenges debt campaigners face. We will hear from inspiring thinkers and campaigners driving forward hard-hitting debt justice campaigns around the world and ask what we need to do to end debt slavery and, critically, how we can strengthen our movements and solidarity amongst us to get there.

A year ago, the Citizen Debt Audit Platform in Spain launched its campaign to fight debt and lack of transparency in the municipalities. The aim was to create citizens’ observatories to put the local budgets under citizens’ control. A totally open source online tool, OCAX (demo.ocax.net) has been developed in order to support this task. It enables any citizen to interact with their City Hall or other local authority about budgets or related issues. All the questions posed by citizens are open to the public on the website and answers from the local authorities can be tracked and processed. It also includes a budget analyser which helps visualise and understand better the budget of your council. In the workshop, the OCAX developers will share with participants its potentialities and also look at how this tool can be useful in your local realities.

BURNING THE BOOKS: There is no debt without a story

From private loans, unpaid corporate taxes, unrequited love and lost lives, to political repression, family feuds and missed opportunities – what debts do you owe or are owed? Artist Alinah Azadeh invites you to add your story to The Book of Debts, a project supported by Arts Council England touring the UK. The Book will be burned in a symbolic act of debt relief in Brighton on 22 May. www.burningthebooks.co.uk

Brunei Suite: Add your story to the Book of Debts Volume 5 throughout the day.

EXHIBITION: Living in a Debtocracy

Look out for this exhibition in the Brunei Suite explaining the Spanish debt crisis, lessons from Spanish debt resistors and their slogan, “We Don’t Owe, We Won’t Pay!” The piece was compiled by Citizen’s Debt Audit Platform (PACD) and Observatory on Debt in Globalization (ODG).

The Citizen’s Debt Audit Platform was born in 2011, with the aim of holding citizens audits to expose illegitimate debts. It considers any debt contracted by a government that did not benefit the population, and any debt used to justify the application of austerity packages, to be illegitimate. The ultimate aim of the PACD is to generate the strength required to refuse to pay these illegitimate debts.

Return to the main conference page >>