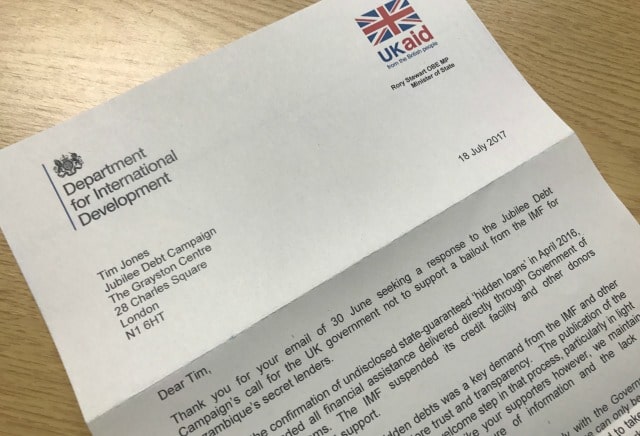 Thanks to the 1,100 people who have emailed the government so far, the Department for International Development have responded to our call for the IMF not to bail out the secret lenders to Mozambique. Working alongside our allies in Mozambique, together we have managed to get the summary of an audit into the loans released, and so-far prevented any loans being given by the IMF which would bailout the reckless lenders.

Rory Stewart MP, Minister at the Department for International Development, states in his letter to us that more information should be disclosed before the IMF resumes lending, and that there will need to be “progress” in addressing the debt crisis – which we hope means cancellation of at least a significant amount of the debt.

In separate statements, the IMF has said more information needs to be released before it will consider new loans, and the World Bank has said the debts need to be ‘restructured’ – ie, reduced in some way.

Whilst encouraging, the UK government’s response ignores the role of the UK-based banks in lending the money secretly, and the huge questions which have been raised about the due diligence they conducted before giving the loans.

We are now putting pressure on the UK government to regulate banks to ensure that they cannot give loans secretly in the future using UK law, or ignore the laws in the borrowing country.

Please ask your MP to support a motion in parliament for new regulations on debt transparency.

For a detailed break down of why Mozambique should not pay the hidden debt, see this essay by Joe Hanlon, a member of Jubilee Debt Campaign’s Academic Advisory Network.