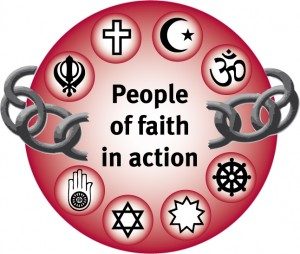 Members of Jubilee Debt Campaign come from all faiths and none. The Multifaith Project ran between 2009-2014 to raise awareness within a range of faith communities about tackling the issue of International Debt and global poverty. Some of the results of the project have been archived in this document.

In 2014 we co-produced a booklet containing six bible studies for Christians and churches exploring faith and economics. You might also be interested in the following links:

Footsteps: Faiths for a Low Carbon Future – Brings together faith groups in Birmingham to respond to the challenge of moving to a low carbon future.

Islamic Relief UK – A British aid agency addressing the needs of the world’s poorest people from emergency relief to long-term development projects in areas such as water and sanitation, health and nutrition, and orphan sponsorship.

Islamic Help – a UK registered-charity and international NGO established in 2003 by a group of young people determined to make a difference to the lives of those afflicted by poverty and suffering.

The Islamic Finance Council UK – A specialist advisory and development body focused on promoting and enhancing the global Islamic and ethical finance industry.

The Muslim Council of Britain – a national representative Muslim umbrella body with over 500 affiliated national, regional and local organisations, mosques, charities and schools.

Methodist and Relief Development Fund – All We Can exists to bring about significant and long term change in some of the world’s most marginalised communities, and to empower people to change structures that are oppressive and unjust.

Christian Aid – A UK charity that works in over 60 countries helping people, regardless of religion or race.

Tearfund – a Christian relief and development agency which works in over 50 countries, and is based in the United Kingdom.

Ekklesia – an independent, not-for-profit thinktank which orients its work around the changing role of beliefs, values and faith/non-faith in public life.

National Justice and Peace Network – The Network was started in 1978 and has organised annual weekend conferences since that date. While the ethos of the network is strongly rooted in Catholic Social Teaching, many J&P groups around the country work ecumenically and others with inter-faith partners.

Nishkam Civic Association – More fondly known as The Nishkam Centre in Handsworth, Birmingham, is a Sikh faith-led organisation working for the wellbeing of all communities, by developing a dynamic civic agenda.

Tzedek – A voluntarily led Non-Governmental Organisation that draws upon the skills and resources of the Jewish Community to better the lives of those less fortunate. Tzedek works with partners, projects and communities abroad, regardless of their race or religion, providing direct support to help local people so they can help themselves. They seek to raise awareness, educate and encourage Jews to recognise, understand and act on to their Jewish responsibilities concerning extreme poverty around the world.

Arya Samaj, West Midlands – The Arya Samaj is an Indian Hindu reform movement that focuses greatly on the welfare of all humanity through altruism and charity and by teaching that all should be treated with love, justice and on their merits.

Sewa UK – A Hindu faith-based humanitarian non-profit service organization. Sewa is a universal concept, which involves performing an act of kindness without expectation of reward. It is performed selflessly and without ulterior motive.

The Inter Faith Network – helps make better known and understood the teachings, traditions and practices of the different faith communities in the UK and the pattern of their inter faith work and builds good relations between people of different faiths in the UK.