Home ⟩ News ⟩ Africa subsidises the rest of the world by over $40 billion in one year, according to new research

Much more wealth is leaving the world’s most impoverished continent than is entering it, according to new research into total financial flows into and out of Africa. The study finds that African countries receive $161.6 billion in resources such as loans, remittances and aid each year, but lose $203 billion through factors including tax avoidance, debt payments and resource extraction, creating an annual net financial deficit of over $40 billion. 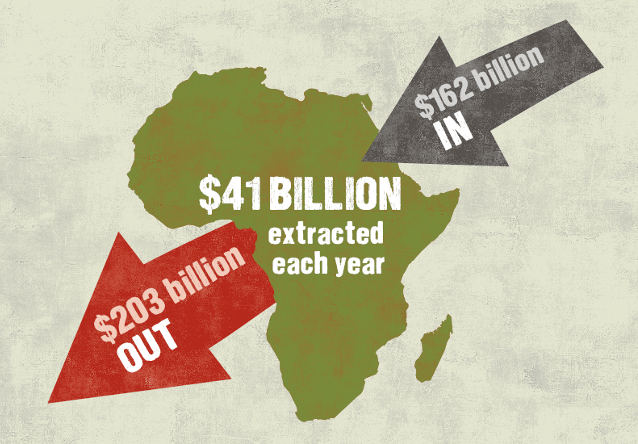 The research shows that according to the most recent figures available in 2015:

“The African continent is rich, but the rest of the world profits from its wealth through unjust debt payments, multinational company profits and hiding proceeds from tax avoidance and corruption.”

“‘Development’ is a lost cause in Africa while we are haemorrhaging billions every year to extractive industries, western tax havens and illegal logging and fishing. Some serious structural changes need to be made to promote economic policies that enable African countries to best serve the needs of their people rather than simply being cash cows for Western corporations and governments. The bleeding of Africa must stop!”

“There’s such a powerful narrative in Western societies that Africa is poor and that it needs our help. This research shows that what African countries really need is for the rest of the world to stop systematically looting them. While the form of colonial plunder may have changed over time, its basic nature remains unchanged.”

“To end poverty we need to focus our efforts on preventing the policies and practices that are causing it. That means we need to stop our tax havens facilitating the theft of billions, clamp down on illegal activities and compensate African countries for the impact of climate change that they did not cause. “

The report ‘Honest Accounts 2017: How the world profits from Africa’s wealth‘, published by a coalition of UK and African organisations, including Global Justice Now, Health Poverty Action and Jubilee Debt Campaign, makes a series of recommendations as to how the system extracting wealth from Africa could be dismantled. These recommendations include promoting economic policies that lead to equitable development, preventing companies with subsidiaries based in tax havens from operating in African countries, and transforming aid into a process that genuinely benefits Africa.

The research covers the 47 countries classified as ‘sub-Saharan Africa’ by the World Bank.