On 29 September the charity Jubilee Debt Campaign will be holding an event in Birmingham to celebrate the 20th anniversary of the largest ever protest in Birmingham and to call for measures to tackle unjust debt in the UK and around the world. The event coincides with the start of the Conservative Party Conference.

In 1998, 70,000 people protested outside the G8 summit in Birmingham, calling for the debts of 52 impoverished countries to be cancelled as a way of celebrating the millennium. This is believed to be the largest political protest ever held in Birmingham. 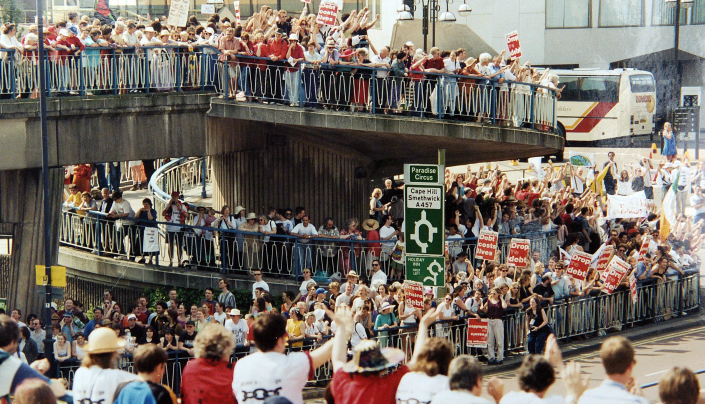 Following the campaign, $130 billion of debt has now been cancelled for 36 countries, helping to tackle poverty and improve access to healthcare and education in many of the countries concerned. However, debts are on the rise again, with average debt payments by developing countries rising by 60% in the last three years, after a boom in lending caused by low interest rates in the US, UK and Europe.

The campaigning group has also begun work on the growing dept trap faced by families and communities across the UK. As part of the End the Debt Trap campaign, it is calling on the government to cap on the cost of loans, credit cards and other debts in order to rein in rip-off lending across the UK.

“Our protest 20 years ago shows that when people come together we can have a real impact, helping to improve the lives of millions of people around the world. But unjust debts continue to be a big problem, from British based banks lending recklessly to governments in Africa, to pay day lenders on our high streets exploiting families with rip-off interest rates. We need the government to hold lenders responsible for these unjust and unethical actions.”

As part of the event, over 100 campaigners will gather at the Cathedral grounds, Colmore Row, Birmingham B3 2QB at 14:15 to unfurl a banner saying ‘Break the chains of debt’.