Figures released today by the Jubilee Debt Campaign, based on IMF and World Bank databases, show that developing country debt payments increased by 85% between 2010 and 2018.

This rapid increase comes after a lending boom driven by low global interest rates. External loans to developing country governments more than doubled from $191 billion per year in 2008 to $424 billion in 2017 (the latest year with figures available).[2]

“The growing debt crisis needs urgent international attention. A vital first step is to require that all loans to governments are publicly disclosed, allowing parliaments, media and civil society to hold governments to account for new borrowing.

“In addition, when crises arise, the IMF should stop bailing out reckless lenders, and require debts to be reduced instead, so that the costs of crises are shared between borrower and lender. All too often, the lenders who helped to cause the crisis are bailed out, while all the costs of irresponsible lending are born by people in the borrowing country.

“There is now evidence of falling public spending in countries hit by high debt payments, further undermining progress towards the Sustainable Development Goals.” 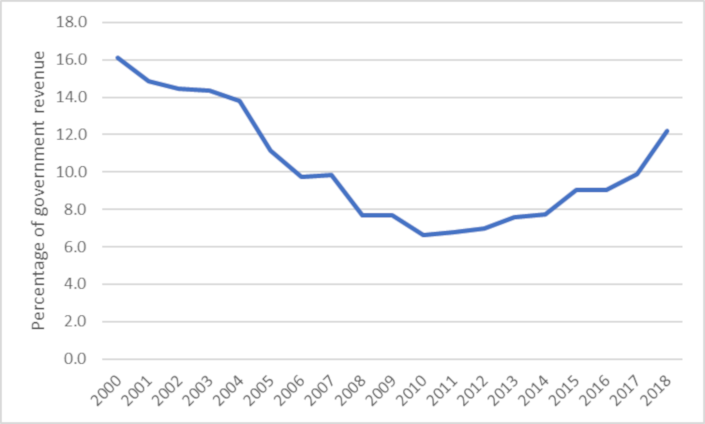 Jubilee Debt Campaign has also calculated that in the 15 countries with the highest debt payments, in ten of them public spending per person fell between 2016 and 2018. Across the 15, public spending fell by an average of 4%. The largest cuts were in Egypt, Cameroon, Angola and Mongolia, all of which are on IMF loan programmes.

In contrast, of the 15 countries with the lowest debt payments, in just two did public spending per person fall between 2016 and 2018. On average across these 15, public spending increased by 11%.

The growing debt crisis will be a key discussion at the IMF and World Bank Spring Meetings in Washington DC from 9-14 April, and the G20 Finance Ministers meeting 8-9 June in Japan.

The fall in global commodity prices in mid-2014 reduced the income of many governments reliant on commodity exports for earnings. This also caused exchange rates to fall against the US dollar, which increases the relative size of debt payments as external debts tend to be owed in dollars. In recent years rising US interest rates have further increased the interest costs of debt and caused further devaluations of currencies against the dollar.

The full figures for all 124 countries are available here.

Where they are available, the figures for government external debt payments as a proportion of revenue in 2017 and 2018 come from IMF and World Bank Debt Sustainability Assessments conducted for individual countries since the start of 2018. In total these cover 48 countries.

The figures are for countries with the lowest debt payments with information available from the IMF on public spending. The figures for the 15 countries are: