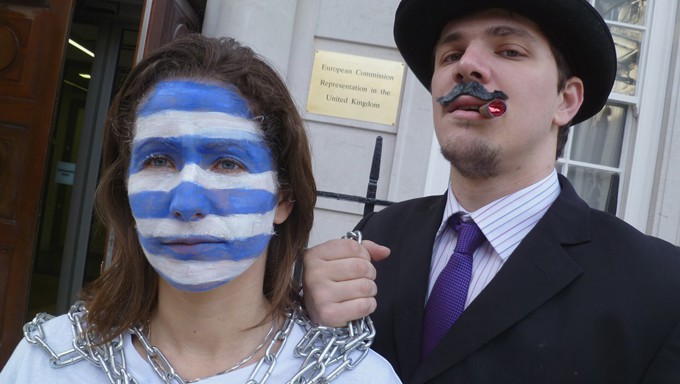 Ahead of talks resuming this week between Greece and other Eurozone governments, the Jubilee Debt Campaign has criticised the fact that current proposals would not have any impact for 15 years, only reducing Greece’s debt payments from the 2030s onwards. The campaign has further calculated that current proposals being put forward by the IMF and European Commission for limiting Greece’s debt costs will still lead to payments 10 times higher, relative to exports, than those paid by Germany after its debt cancellation of 1953.[1]

“The EU and IMF seem determined to delay the conversation about debt relief for Greece until after austerity measures have been implemented. Could it be because they are not proposing any relief from Greece’s debt crisis at all? These proposals would still allow Greece’s debt payments to be higher than those of any country in the world today. In a crisis for which banks and governments across Europe share responsibility, it cannot be right that Greece will be left burdened by debt payments ten times greater than those of Germany following its debt cancellation of 1953.”

The information is contained in a new briefing launched today by Jubilee Debt Campaign, “The Never-Ending Austerity Story: Why Greece’s third ‘bailout’ solves nothing”.

The IMF and European Commission have suggested that Greece’s debt payments should be limited to 15% of GDP, which amounts to around 37% of government revenue and 33% of exports. This is above current debt payment levels of between 11% and 21% of exports, so a cap at such a level would be likely to have no impact until the 2030s.

In 1953 Germany had half its debt cancelled, and payments on the other half were linked to Germany earning a trade surplus with the rest of the world. The maximum annual debt payments Germany made under this deal was the equivalent of 3% of exports.

“Without debt cancellation – as opposed to limited rescheduling – and a reversal of damaging austerity policies, the Greek people face many more years and even decades of stagnation, high unemployment and poverty. As the European banking crisis looms back into view, it is more important than ever that EU governments begin to be honest with their people about the choices they made to save the Euro, and the European banking system, in 2010, and stop forcing the costs of those choices exclusively onto the people of Greece people.”