Figures released today by the Jubilee Debt Campaign, based on IMF and World Bank databases, show that developing country debt payments increased by 60% between 2014 and 2017. They are now at the highest level since 2004.

This rapid increase comes after a lending boom due to global interest rates being low. External loans to developing country governments almost doubled from $200 billion per year in 2008 to $390 billion in 2014. They have since fallen back to between $300-350 billion per year from 2015-2017, but this is still well above levels seen prior to the global financial crisis.

The fall in global commodity prices in mid-2014 has reduced the income of many governments which are reliant on commodity exports for earnings. They also caused exchange rates to fall against the US dollar, which increases the relative size of debt payments as external debts tend to be owed in dollars. 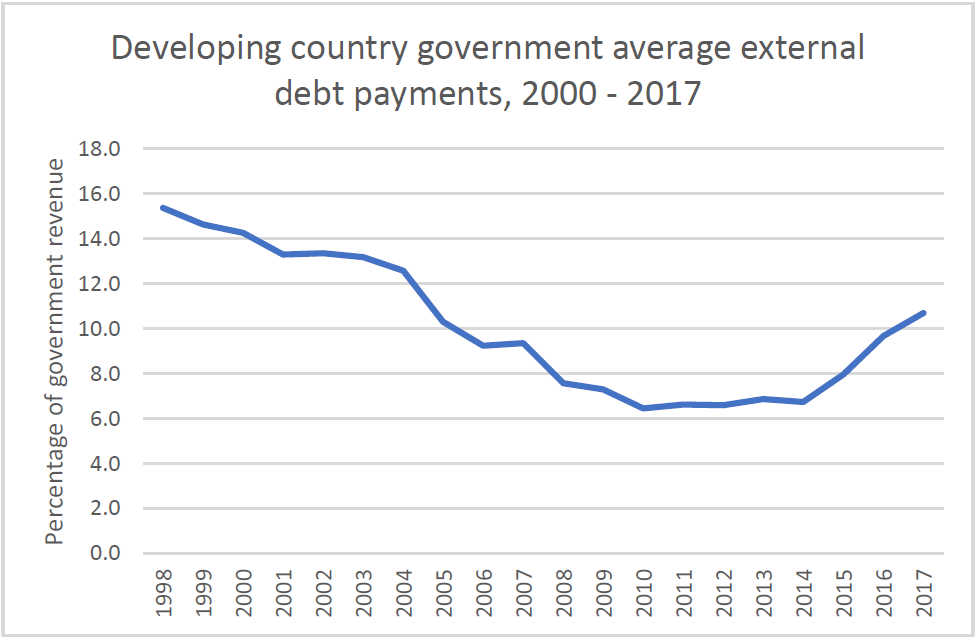 “Debt payments for many countries have risen rapidly as a result of a lending boom and fall in commodity prices. The situation may worsen further as US dollar interest rates rise, and as other central banks reduce monetary stimulus. Debt payments are reducing government budgets when more spending is needed to meet the Sustainable Development Goals

“Where there are debt crises, the risk is that the IMF will bail out reckless lenders, and the debt will remain with the country concerned. Instead, reckless lenders need to be made to bear some of the costs of economic shocks through lower debt payments, allowing governments to maintain spending on essential services.”

Countries with the highest debt payments in 2017 include:

Developing country external debt payments fell between 2000 and 2010 because of rising prices of commodity exports and the Heavily Indebted Poor Countries Initiative, which cancelled almost $130 billion of debts owed to governments and multilateral institutions for 36 low and lower middle-income countries.

The IMF say that of 67 impoverished countries they assess, 30 are now in debt distress or at high risk of being so. This has doubled from 15 in 2013 (see graph below). 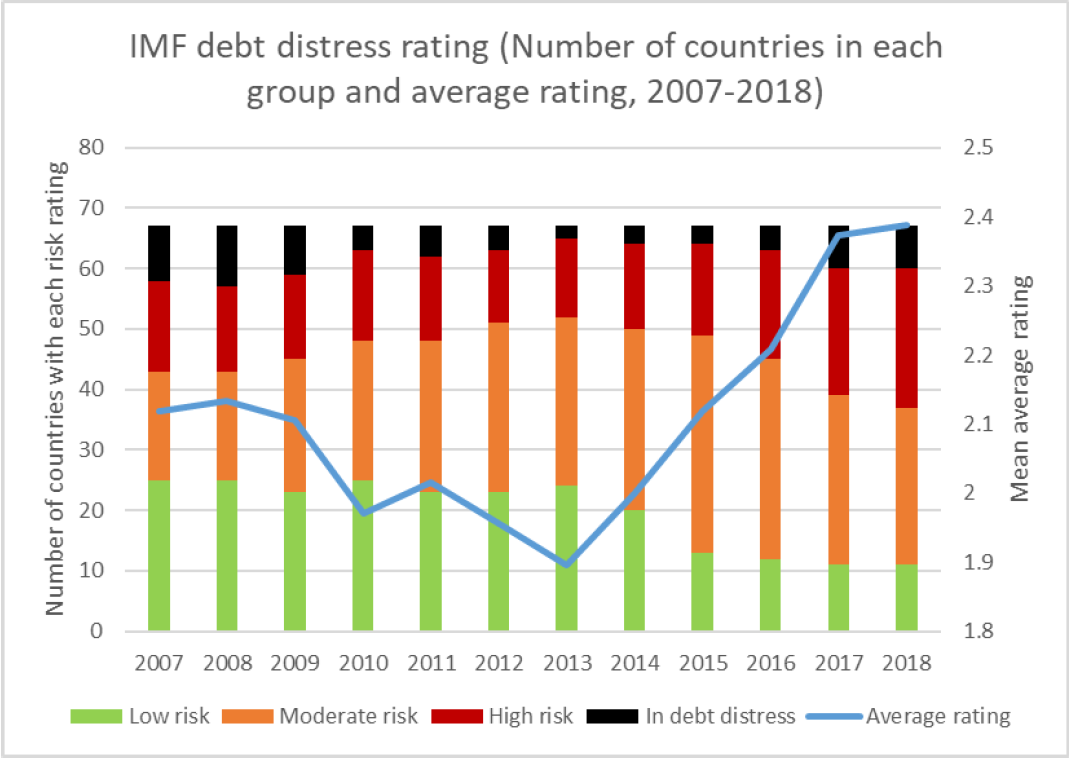 The twenty countries with the highest debt payments in 2016 were:

The full figures for all 126 countries are available here.

The average figure is a mean unweighted average. The median unweighted average has increased by 75% between 2014 and 2017, from 4.9% of government revenue to 7.9%, indicating that the mean increase is a general trend rather than due to particular outliers.

Where they are available, the figures for government external debt payments as a proportion of revenue come from IMF and World Bank Debt Sustainability Assessments conducted for individual countries. In total these cover 60 countries.

Since mid-2014 there have been, for example, the following falls in currency against the US dollar:
Angolan kwanza: down 54%
Mozambique metical: down 52%
Zambian kwacha: down 37%
Ghanaian cedi: down 29%
Tunisian dinar: down 29%

Annual external loans disbursed to low and middle-income country governments have increased from $202 billion in 2008 to $390 billion in 2014. For 2015-2017, disbursements have been $332 billion, $347 billion and $332 billion. Source: World Bank World Development Indicators database.