Home ⟩ News ⟩ EU must not ‘enslave’ Greece at behest of banks 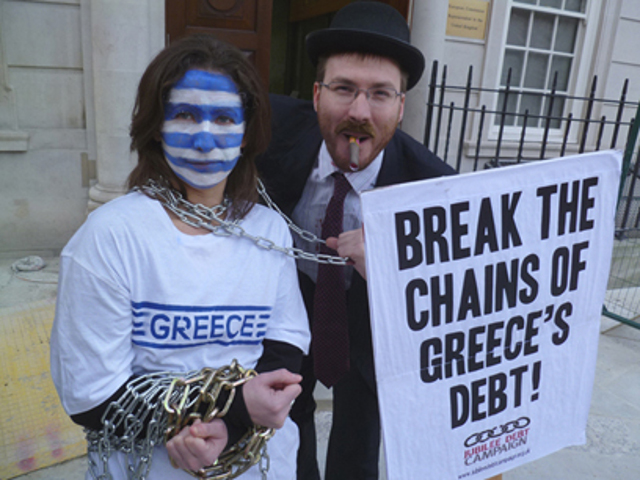 Ahead of today’s meeting of Eurozone Finance Ministers in Brussels to discuss the €130bn bailout of Greece’s creditors, campaigners from Jubilee Debt Campaign [1] have demonstrated outside the European Commission office in London over the EU’s imposition of further austerity packages on Greece.

Campaigners held a photo opportunity showing the French, German and British banks whose interests are being prioritised by EU leaders holding Greece in the chains of debt slavery. [2]

Jubilee Debt Campaign, which was set up to campaign for a ‘debt jubilee’ for developing countries, says history is repeating itself in Europe. It is calling for a ‘jubilee style’ debt cancellation in Europe which would entail transparent debt audits, steep and democratic write-down of debts, regulation of financial institutions and social control of banking. [3]

Jonathan Stevenson, Campaigns Officer, said:
“What is happening in Greece today mirrors what has been happening in the developing world for 30 years – unaccountable international institutions demanding a pound of the people’s flesh in exchange for bailing out banks and rewarding speculators.

“This package only bail-outs the banks – indeed proposals on the table at the moment suggest that Greece will not even see most of this money – it will be paid to the ‘creditors’ through a separate account. In this light, the austerity measures seem to be no more than a sadistic punishment which even some of those pushing it know very well will have only a detrimental impact on Greece’s economy.”

The Greek Debt Audit Campaign which is demanding a full audit of Greece’s debts to examine their legitimacy, has condemned the bailout which it says will “enslave us to the state’s creditors” [4]

Social movements around Europe declared Saturday 18 February a day of solidarity action with the Greek people under the banner ‘We are all Greek’. [5]

1. Jubilee Debt Campaign UK is part of a global movement demanding freedom from the slavery of unjust debts and a new financial system that puts people first.