• Figures released before US Federal Reserve meeting where interest rates are expected to be increased again, which will push debt payments higher

Figures released today by the Jubilee Debt Campaign, based on IMF and World Bank databases, show that developing country debt payments increased by 45% between 2014 and 2016 [2]. They are now at the highest level since 2007.

The rapid increase comes after falls in commodity prices in mid-2014 and the rising value of the US dollar. These changes have reduced the income of many governments which are reliant on commodity exports for earnings. They have also caused exchange rates to fall against the US dollar, which increases the relative size of debt payments as external debts tend to be owed in dollars.

Low interest rates in Western countries have also driven a large increase in lending to developing countries in recent years. External loans to low and lower middle income countries have more than quadrupled between 2008 and 2016, from $56 billion to $262 billion. 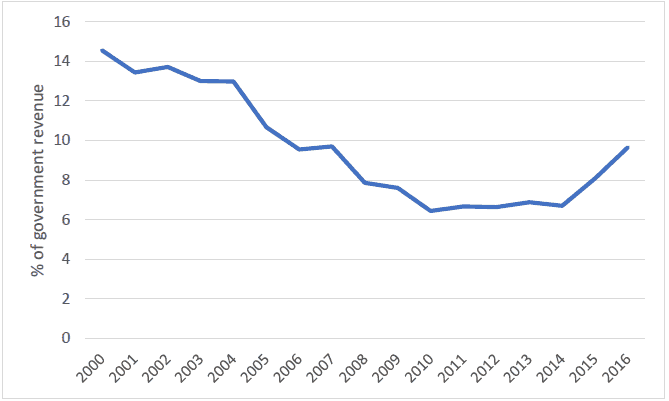 “The rapid increase in debt payments in many countries comes after a boom in lending, a fall in commodity prices, the rising value of the US dollar and now increasing dollar interest rates. This is putting pressure on government budgets, just when more spending is needed to meet the Sustainable Development Goals.

“In countries where debt crises have arisen, the danger is that IMF and other loans will bail out reckless lenders, increasing debt burdens, and leading to years of economic stagnation, just as in Greece. Instead, reckless lenders should be made to shoulder some of the costs of recent economic shocks by accepting lower payments.”

Countries with the highest debt payments in 2016 include:
• Commodity producers which have been hit by price falls, including Ghana, Mozambique, Angola, Laos and Chad
• Countries on the frontline of refugee flows from Syria – Lebanon and Jordan
• Small states which were previously considered ‘too rich’ to benefit from significant debt relief initiatives, including Grenada, Jamaica and the Dominican Republic.

Mozambique started defaulting on its debt in January 2017. In April 2016, the IMF suspended its loans bailing out Mozambique’s previous lenders, after it was revealed that two London banks, Credit Suisse and VTB Capital, had lent $1.1 billion to two companies in Mozambique, with government guarantees, without the loans being made public, agreed by the Mozambique parliament or disclosed to the IMF.

Developing country external debt payments fell between 2000 and 2010 because of rising prices of commodity exports and the Heavily Indebted Poor Countries Initiative, which cancelled almost $130 billion of debts owed to governments and multilateral institutions for 36 low and lower middle income countries.

The twenty countries with the highest debt payments in 2016 were:

[1] For more detailed information see our briefing: ‘The new debt crisis in the global South‘ which includes full data tables for all 122 countries

[2] The figure is a mean unweighted average. The median unweighted average has increased by 49% between 2014 and 2016, from 4.9% of government revenue to 7.3%, indicating that this is a general trend rather than due to particular outliers.
Where they are available, the figures for government external debt payments as a proportion of revenue come from IMF and World Bank Debt Sustainability Assessments conducted for individual countries since the start of 2016. In total these cover 44 countries.

[5] For example, since mid-2014, there have been the following falls in currency against the US dollar:
Mozambique metical: down 56%
Malawian kwacha: down 45%
Angolan kwanza: down 41%
Ghanaian cedi: down 36%
Tunisian dinar: down 27%