Bank of England figures release today show that unsecured personal debt in the UK has increased 6.5% in the last year. Adjusting for inflation, Jubilee Debt Campaign has calculated that this means such debt has increased by 27% in real terms since the low reached in 2013 after the financial crisis.

In contrast, over the same time period, real wages (taking account of inflation) have increased by just 4%, and are still lower than before the financial crisis. This means unsecured credit has grown by six times more than wages in real terms.

“Household debt has grown a shocking six times faster than wages over the last five years if you take inflation into account. This is yet more evidence that Britain has a growing household debt trap that’s hurting the poorest families the most. Low wages, insecure work, rip-off lending and cuts to our social safety net mean more and more families are having to borrow just to survive.

“This situation simply isn’t right. We need urgent action by the government to make work pay and rein in the loan sharks preying on desperate people. To start we need to raise the minimum wage to at least £10 an hour, a ban on zero hours contacts, and an upper cap on interest rates and charges for all forms of consumer credit.” 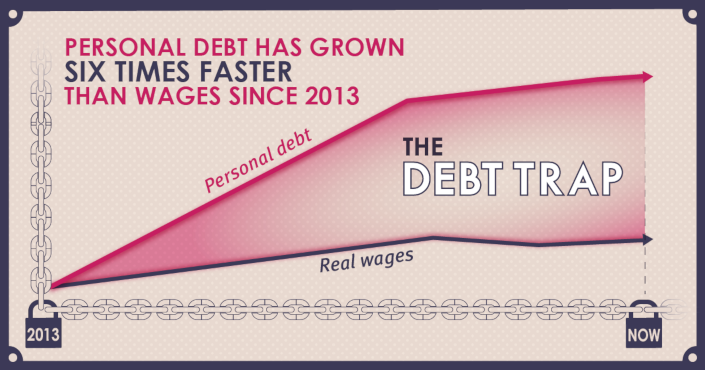