In contrast, for the 30 countries with the lowest debt payments, public spending increased by 14% between 2015 and 2018.

Debt payments will continue to increase over the next three years in the best-case scenario – of strong economic growth and no economic shocks. But if there are widespread economic shocks – such as falls in commodity prices, rising interest rates or widespread disasters due to climate change – average debt payments could continue to increase rapidly to the highest level in over 20 years.

“The world must wake up to the growing debt crisis in poor countries. Ballooning debt payments and cuts in public spending are a recipe for disaster. Meeting the Sustainable Development Goals to cut poverty and inequality requires large increases in public spending, but in many countries the opposite is happening. We need the IMF and World Bank to stop bailing out the reckless lenders who are contributing to runaway debts and play their part in bringing about fair and rapid debt restructurings for countries in crisis.”

Republic of Congo has seen huge cuts in public spending of well over 50% between 2015 and 2018. Chad has the next highest cuts of 35% by 2018. Both these central African countries are in debt crisis following loans from oil traders. Mozambique’s public spending has been cut by 21% on 2015 levels by 2018, following the country’s debt crisis triggered by secret loans from London-based banks.

Zambia has increasing debt payments primarily due to high interest rate bonds and other loans from commercial banks, while its revenue has been hit by falls in the price of copper. In 2019 Zambia’s public spending is due to be 18% lower than in 2015 with further cuts anticipated by the IMF for several years to come. Sierra Leone’s debt payments have shot up following the Ebola crisis. Almost half of the government’s external debt is owed to the IMF. Public spending in 2018 in Sierra Leone was 10% less per person than in 2015, though the cuts on 2016 levels are even greater – 17%. 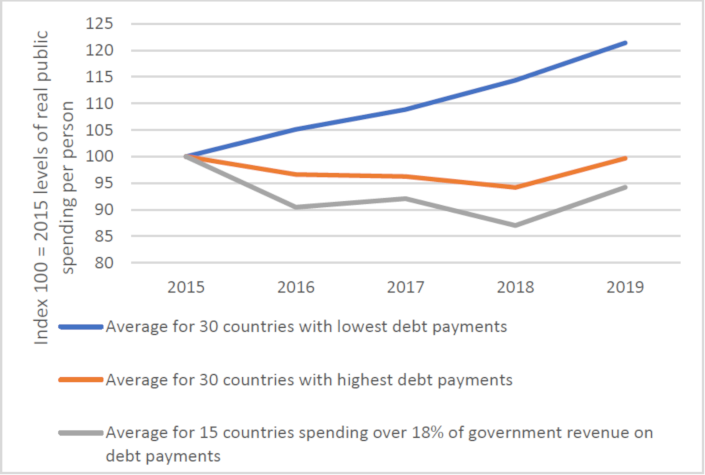 We would like to thank Action Aid International for contributing to the costs of this research.